We often talk about our preferred metric for measuring market valuation levels, the real 10-year normalized P/E ratio. In our version, we use 10-year average adjusted earnings (via our trusty Bloomberg), adjusted for inflation, and divide that into the real/inflation-adjusted S&P level. 10-year average (normalized) earnings smooth out the volatility associated with typical corporate earnings cycles.

While we’re fully aware that using a P/E ratio of any sort to make short, or even intermediate-term, market predictions is fool’s gold, the real 10-year P/E has a very good track record in terms of predicting future 10-year annualized returns, whether nominal or real. We use simple regression analysis to gauge the statistical strength of the relationship between P/E ratios and future returns. Of course, regression analysis also allows us to make predictions about future performance using the slope and intercept values generated from the regression. There’s variance around these predictions, but the actual values have historically been reasonably tight relative to the values predicted by the standard regression line, a reflection of the high correlation between P/E and future growth.

To provide a nice visual of how this relationship had worked out over time in terms of actual nominal index level versus predicted values for that month in time, we graphed the predicted values for each month against the actual nominal level of the S&P. We extend this forward as well to perhaps give us a rough idea of where the market may be heading over the next several years. The chart showing actual S&P 500 levels from 1950 to the present versus the levels that would have been predicted by P/Es 10 years prior is below: 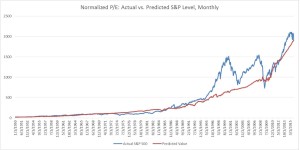 As you can see, the S&P 500 has moved, at various points in time, away from the levels predicted by P/E levels a decade before, most notably during the massive bubble during the late 1990s and during the cyclical bear market of the 1970s. Whether below the predicted line or above, however, the two lines have found their way back to one another. Perhaps of some comfort to equity investors out there, the current S&P 500 is very close, especially with the current correction to the “correct” level. That doesn’t mean the market can’t go down from here—markets tend to overcorrect to the upside and downside not matter what metric one tends to use. But, it does appear that we’re no where close to facing the same sort of deviations observed last decade that contributed to the painful secular bear market.

Now, let’s look at a chart of predicted levels for the S&P 500 for the next 10 years using normalized P/Es as our guide. 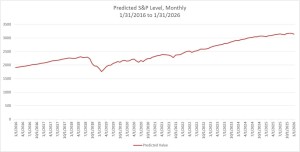 This chart is a little more problematic than the first one. This seems to tell us that US equity investors should expect a choppy, frustrating, go-nowhere market for the next several years before markets begin to find the footing to move higher in a sustained fashion. Perhaps the late 2017 or early 2018 time-frame brings in the next “real” cyclical bear market, and/or recession?

As past actual vs. predicted levels indicate, there can be wide variations. Nonetheless, we think it’s prudent to say that, while at this point there’s no major 2008-style collapse in the cards, there’s little reason for US equity investors to believe (or hope) that above-average market returns should play out over the next five years. There’s a strong possibility that the frustration-factor will remain high.

Here’s some potential good news. Because our global data sets through Bloomberg don’t contain enough data points to carry out an analysis like the one we’ve performed above for the S&P 500, we can’t reliably produce these predictive numbers for ex-US indices. We do know from various studies, however, that normalized P/Es provided similarly reliable predictions for future 10-year returns when looking at global indices. At this point, developed and emerging market indices alike are trading below historical averages on a normalized basis, with emerging market indices trading in single-digit territory by some measures. The valuation differential between US and ex-US indices has widened in recent years. US equities may be a source of frustration going forward, but we increasingly believe that equity markets outside of the US will outperform for the first time since the early 2000s. There’s a good chance these markets can perform above of their historical averages going forward, in our estimation. This is reflected in our portfolio’s current composition, with ex-US stock representation outpacing US representation to a level we’ve never observed.